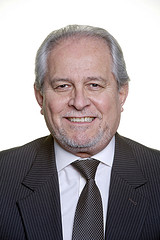 Mr. Roman-Morey’s previous diplomatic experience includes service as Ambassador to Cuba in 2007, Minister Counsellor in Mexico and other foreign postings in Egypt and Bolivia, among other countries.  He served as Special Adviser to the Minister for Foreign Affairs and Ambassador-at-Large for Disarmament and Security Affairs in 2006.

Appointed Deputy Secretary-General of the Conference on Disarmament in 2000, he served simultaneously as Director at the then United Nations Department for Disarmament Affairs in Geneva.  He held senior positions in Peru’s Ministry of Foreign Affairs, including Adviser to the Minister in 1993, Director of the Executive Office of the Deputy Minister from 1987 to 1989, and Chief Adviser to the Presidency of the Foreign Trade Institute in the Ministry of Foreign Trade in 1986.

He was educated in Peru, the United States and Mexico.